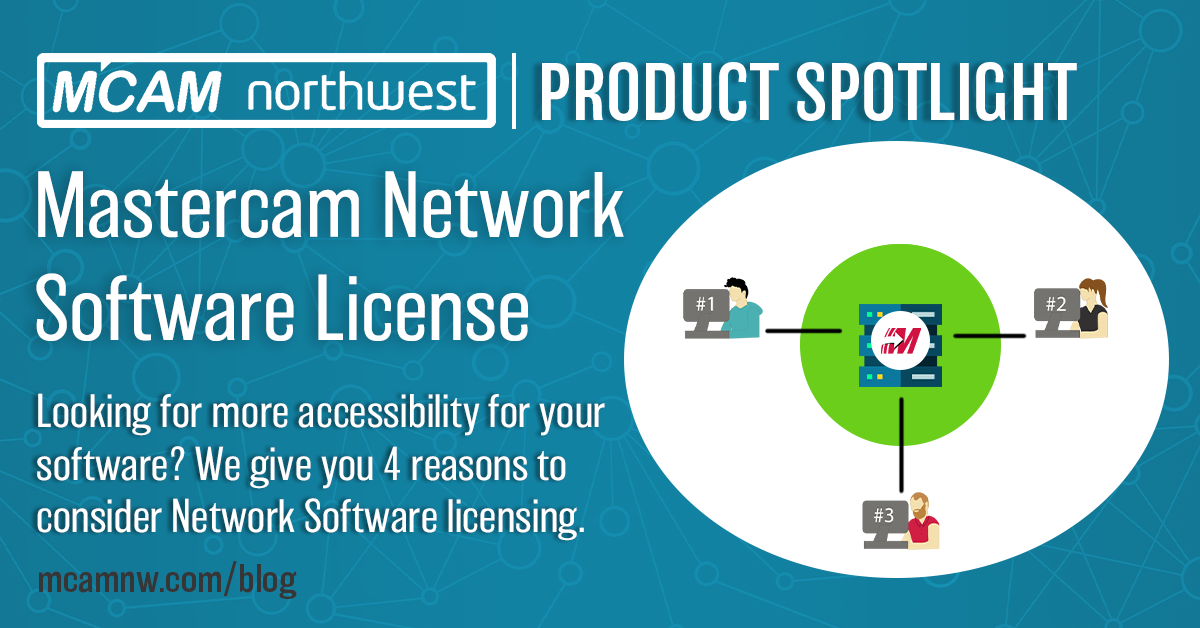 We explain the key differences and added benefits of using Network Software Licenses over Single-Seats.

A big benefit of Network Software licenses is that they “unlock” your Mastercam licenses from each other. 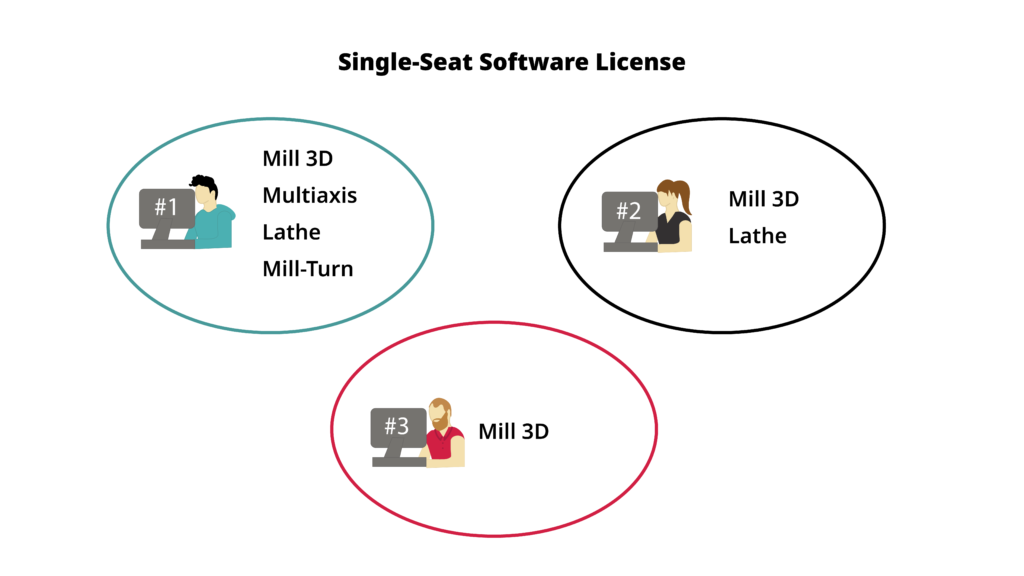 Single-Seat Mastercam licenses are treated as separate entities, giving each user access to Mastercam products under their own “seat”.

Every time Programmer #1 wants to use Mastercam Lathe, they will also be opening their Mill 3D, Mill-Turn and Multiaxis licenses, even if they don’t need to use all these products at this time.

If your programmers all use Mill 3D, but infrequently, you could purchase only one seat of Mill 3D, instead of three. However, if you do this with a single-seat license, Mill 3D would have to be activated and deactivated on each programmers’ computer after each use to be accessible by all three programmers at different times of the day.

However, if you were to have a Network Software License, Mill 3D, Lathe, Multiaxis and Mill-Turn are treated as separate entities but hosted in one central location (the server), not on a programmer’s workstation. This means that all licenses only need to be activated once on the network host/server to be accessed by all of them. For example, if Programmer #1 is using Mastercam Lathe, Programmer #2 can access the second seat of Lathe and Programmer #3 can access Mill 3D, all without interrupting each other’s access to Mastercam.

A Network Software license must be hosted on a network server or on a single, ideally, unoccupied computer/workstation. If you use a computer/workstation to host the network licenses, it should be a workstation that no one uses, since it must be left on at all times to give everyone access to the Mastercam licenses.**
**Note: I.T. assistance may be needed.

For both single-seat and network software licenses, a single license of a Mastercam product cannot be accessed by multiple users at the same time. Network Software licenses allow you to purchase fewer licenses, since the licenses won’t be attached to a specific computer as they are in Single-Seat licenses.

A way to avoid tying up licenses for other users on your network is to customize the Mastercam Launcher to only launch specific licenses. Watch the Streamingteacher Tech Tip to learn how to do this: https://youtu.be/5Plo4l_HaCM

The License Borrowing feature of Mastercam Network Software Licenses allows a user to “check out” a Mastercam product license off-network for up to 10 days, to work in Mastercam outside of the office. This feature makes having a Network Software license a great option if you have programmers who work outside the office for short durations.

To accomplish something similar using a Single-Seat license, the only option is to: 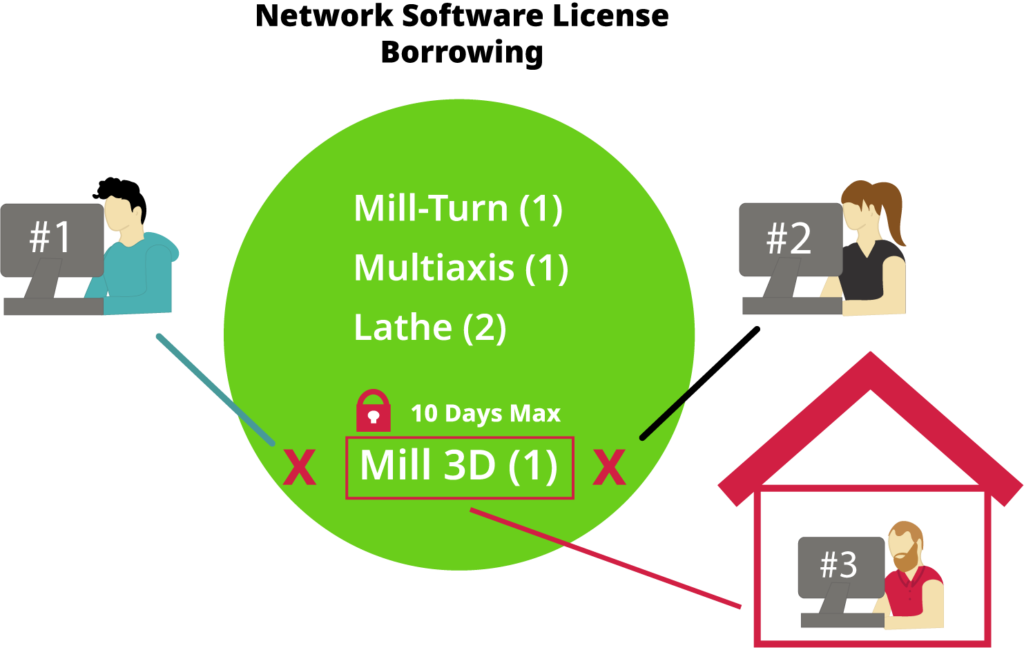 Network Software Licenses give you the ability to “borrow” licenses for remote work up to 10 days. In this example, if you have one license for Mill 3D being borrowed by one programmer offsite, the other two programmers would not be able to access Mill 3D during its borrowing period.

Since this type of license does not use the internet to function, the Codemeter application will block the license from being accessed by anyone on the network server while a license is in its borrowing period. For example, if you have one license of Mill 3D, when Programmer #3 borrows it from the network while they are working from home, Programmer #1 and Programmer #2 won’t be able to access Mill 3D. However, if you have another Mill 3D license on your network, one of the programmers will still have access to it.

Things to Note About License Borrowing

Before running the Mastercam License Borrow Utility, be sure that:

If a license is being borrowed, and another programmer in your network needs access to it earlier than its return date, the license can be returned to the network early, but only by the borrower. However, the network administrator can boot any in-network, onsite user out of their Mastercam seat at any time.

If you need to use a license remotely for longer than 10 days, you can use a Virtual Private Network (VPN)* to access a license from your network.

*Note: VPN connections will require using your own IT department to manage network and firewall settings.

With Network Licenses the administrator can track who is accessing the licenses and the frequency they are being accessed. It helps give you data that you can use to make budget decisions for using the software over time (re-evaluating the number of licenses you actually need).

Why Choose a Network Software License Over a Single-Seat?

Network Software Licenses are ideal for situations where your programmers need more flexibility in their access to Mastercam. Depending on your situation, it’s also a way to have more control over the amount of licenses you need, leading to potential cost savings over time. We are happy to help you determine which solution will work best for your programming needs and situation. Reach out to our Sales Team at sales@mcamnw.com for a consult and quote for Network Software Licensing.